This week I didn’t get to finish everything I wanted to do, but c’est la vie. I finished Christmas shopping finally, which happened to be what kept me from the other things. I did not finish the book series, I am on level 23 on Skyrim and will be on level 25 by Monday, I did write in my horror story this week, and I did not get to write an installment in The Journal of a Thrall. Its kind of hard to write if you’re out and about. I think the highlight of my week was yesterday when I got the Thief game for Xbox one. And that’s it.

Well, I can certainly say I am thrilled that the weekend is over because in turn it means the ACT + Writing is over. So basically my weekend consisted of going to the potluck which was really fun, can’t wait to play werewolf again, taking my 5 hour ACT, and then blowing a full day on nothing but cleaning, playing Skyrim, and setting up Skype over the phone for my younger cousin.
Last weekend was definitely tiresome but now I can waste my time on playing Skyrim and purchasing books for college.
This week I shall be finishing Christmas shopping, the first half of the Percy Jackson series hopefully, getting to level 25 in Skyrim, hopefully writing an entry for the Journal of a Thrall, getting some writing done in my horror story, and playing Devil May Cry.

This week I pretty much just spent it entirely on studying for the ACT tomorrow. I am still working out my driving schedule which has been quite frustrating. And I finally finished a book I wanted to finish. That’s it, apologies for it being so short but I feel ill this morning.

So this week has been busy but simple. I’ve only really been studying for my ACT, reading a book series, picking a college to transfer into during the summer, and I did end up finishing ten seasons of Supernatural in under two months. Is it wrong I’m proud of that?
So that’s that. Short and simple. Now I am off to bed, I must get up around 5-6 in hopes of making the tour starting time. Let’s hope I shan’t perish in thy sun tomorrow.

Apologies for this being so late, I was quite busy today. But anyways, this week I took two tests so I could be enrolled into ABTech, I have been spending most if not all of my time preparing for my ACT so that when I transfer to an Art school it’ll help me get in. I finally mailed a comic to my friend who I ment to send back in the beginning of November, and I’ve almost completed 10 seasons(218 episodes) of supernatural in under two moths. Stupid goal, but I made it after hearing someone say it was impossible to finish 100 episodes in three months. Ha, I’ve proved you wrong…and have also proved I enjoy wasting my life on TV. Oh well, c’est la vie.
So overall it was a boring week…except the pie and gravy, that was great. Probably made the week.

I’m back from Chicago! Wahoo!…………Nah I’m just kidding, it’s sucks being back home, I miss the city.
So this week I met with a woman from the New Student Services at ABTech for Early College. I started a series for when I’m having writers block which is called The Journal of a Thrall. Its title pretty much tells what it is but for those who do not know, it’s about a Thrall, which is a servant/slave in Norse/Scandinavian culture, who is recording their(gender and age is chosen by reader) time to and through Valhalla, Helheim, Niflheim, and possibly other places. Valhalla is where warriors go after they’ve died in honor or battle, Helheim is a place for a more lazy death such as dying in bed, Niflheim is for those who died neither an honorable or a notable death.
I am currently practicing for the ACT test, I’ve just finished up the class part of Driver’s Ed, and I’m currently planning my graduation party.
I am also hoping to finally read Macbeth or one of my many books.

This is it…
This is the end. My master has died and the kingdom is under new lead by my master’s son. He has ordered that three others and I shall be buried with his father to aid him in Valhalla. It has been an honor to serve the king in his time of reign.
I see my king once more as we march through the halls of the fallen to the pits.
They unlock our chains as they lead the first one of us to the edge of the blue pits. He struggles to get away; he’s a boy of only thirteen years. He pleads and yells for freedom. But they fall on deaf ears as they restrain him and toss him in the pits.
After the next two go it is my time, I shake them off and walk myself up to the edge. I turn around, cross my arms, I lean over the edge, and let go of my footing. Falling over the ledge. Voicing my final thoughts aloud, “I have served, and will serve once more”.

This week I did Driver’s Ed again, I went to AB-Tech to talk more about early college, I also went to the gym and lifted some weights, I got up to 50lbs in weight lifting. I am in Chicago, I’ve had no luck getting my brother to read but there is always the trip back, I’m going to tour the Columbia art college tomorrow then I am meeting up with my friend on Sunday. I also should have a short story or art piece done tonight and posted on here.

I am currently working on Driver’s ED that should be finished this month and I am going through the practice sheets for the early college entrance exams. 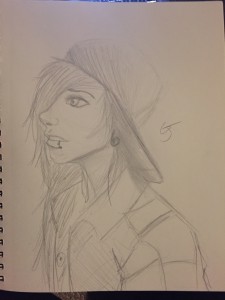 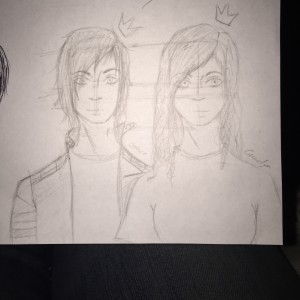 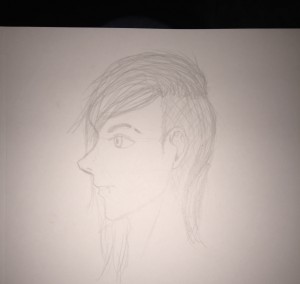 These are three more sketches finished for the ALC intentions. The middle one still needs some detailing, like Shrinking the necks and adding in some shirt details. I’m also planing on inking and coloring the last one.